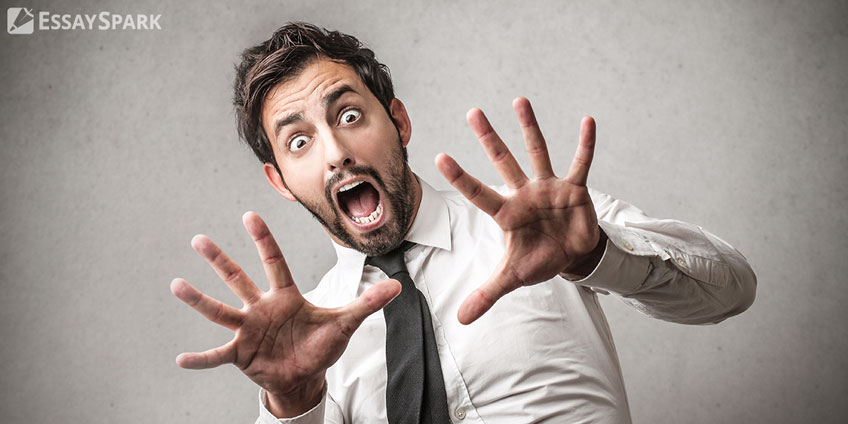 In our fast-moving world, academic writing is a must for students who are getting their degrees. Any assignment requires its own instructions. First of all, you need to choose what the purpose of an essay is: persuasive, analytical or informative. The writing should be logically organized, so build up your point of view to include in writing. Do not forget that an article or an essay should be created in an appropriate writing style. Consult the following example of article writing on Social Psychology concerning fears!

Fear is an emotion that protects us from the danger emanating from our environment. As humanity developed, our fears became more complex, weird and sometimes simply absurd.
What are we most afraid of? Of course, each of us will have his/her own answer to this question, but there are some fears common to most people. Recently, foreign psychologists have ranked the biggest human nightmares in surveys. Perhaps some items will surprise you. Let’s look at the TOP-10 fears and check whether you are an owner of one of them!

Fear of Being Alone

Still, we are social creatures and more adjusted to live in a community than alone. As scientists have found out, even very closed and autistic individuals are afraid to remain without a support at heart.

It can vary: for example, a person is afraid of water, height, a sight of blood, dead people, pain, closed or, on the contrary, overly open spaces. The fear of death is inherent to each of us, to varying degrees; it is closely connected to the sense of self-preservation.

We are afraid of other people, and this can be manifested, for example, in the lack of communication or the fear of public speaking. We are afraid that they will misunderstand, condemn and laugh at us. For someone, it becomes an obsessive phobia, and he/she starts avoiding contacts with others, because they are too painful for him/her.

It could be dogs, spiders, rodents, cockroaches, snakes. A number of people are afraid of flying, some are afraid of cars or darkness. These phobias are caused by some negative associations: most often, a person has experienced an unpleasant situation in childhood. But people sometimes just speculate what can happen to them when they come into contact with such an object, and this may have nothing to do with reality.

Not only asexuals or impotents suffer from it, but also people with normal sexuality. The reason for this may be an unsuccessful previous sexual experience or emotional problems not related to sex.

As a rule, it is experienced by spiritually developed people, for example, scientists, philosophers, writers, artists, religious figures. All of them try to discover the world and, along the way, they face the things that make them doubt about their mental state.

Fear of Germs and Bacteria

People, who have this phobia that takes on exaggerated forms, wash their hands a hundred times a day, do housework several times and often refuse to touch various objects, because they are afraid to "get infected".

First of all, it is peculiar to men, since they are taught from childhood that it is a shame to be a coward. However, such people, due to their peculiarity, often become responsible and are perfectly fulfilled both in personal and professional spheres.

Most often successful and influential people suffer from it.  In former times, unwanted rulers and public figures were really often eliminated with the help of a poison. Nowadays, such things are rarer, but they still happen. According to psychologists, not more than five percent of the world's population has this phobia.

Fear of Getting Old

This rating is explained by the fact that young people have this phobia quite rarely. According to statistics, most often it affects middle-aged women, as well as men who are already over 50 and who consider themselves to be unsuccessful.

How to Overcome Fears?

The main thing is to know that everything is practically fixable. Variants of how to deal with this are ample. There are methods of psychoanalysis and behavior therapy. It is possible even to resort to medicines. However, it is better to try either to overcome fear, or get the best of it. After all, there are some well-known cases when people who are afraid of height became climbers. Those who are afraid of water began to swim perfectly and go scuba-diving. This relates to absolutely any kind of phobia.

Everything starts with your mind, so keep calm and go ahead!

Do you still have a fear of academic writing on Social Psychology? We hope you will perform it easily after reading the provided sample.